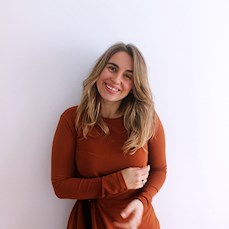 On my blog I highlight the meaning of "sustainabillity" for food, but above all for sustainable health. I don't like restrictions and I don't belive in them. I believe in " a little bit of everything". That is why I offer food from different kinds of diets and allergies (eg vegan, vegetarian, gluten-free, rawfood, etc.) so that there is no focus on limitations, but rather the possibility of choosing what suits one's self the best.

On my blog you will also find posts about health and workout, and kitchen and travel stories when I am traveling around the world. I hope you join me on my journey through a 100 kitchen s

● WINNER in the first season of the tv-show and food competition "Mataam".

● Named one of the Best Food Bloggers 2017 in Sweden by Ingredient Matchmaker.

● Named one of the Best Food Bloggers 2016 in Sweden by Mitt Kök, Expressen.